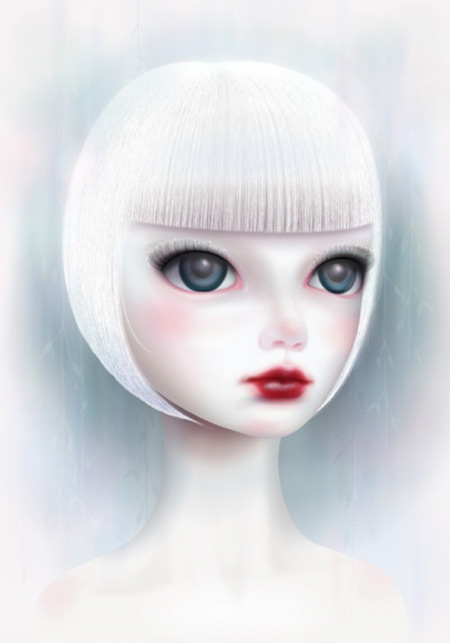 Last week end was the 2009 edition of the Newcastle Gateshead Art Fair at the Sage. Living only minutes away from the venue and having been invited to the VIP opening night I had absolutely no excuses not to turn up. There were quite a few interesting art galleries, artists and photographers that I’m going to talk about during the week starting today with one of my “coeup de coeur” Marie Blanco Hendrickx aka Mijn Schatje.

Marie is currently living in Paris and works as a illustrator and graphic designer. She’s half Spanish (father), half Dutch (mother) and has been travelling all over Europe as a child and even further away as an adult. Her work is based on fairy tales and a totally imaginary world she’s been developing (or living in) as she was growing up. She even thought for a long time Jimi Hendrix was her uncle apparently. She’s now an active member in the Parisian music scene where she creates CD covers for various Electro Labels like Record Makers (founded by the duo Air). Her work is globally quite dark but also very clean, pure and poetic which somehow emphasize the sadness of her wide eye characters/dolls.

Marie Blanco Hendrickx was represented in the Newcastle Gateshead Art Fair by Opus Art which is currently hosting an exhibition (3 – 31 October 2009) called Dark Surrealism where some of Marie‘s pieces will be showcased with the like of Dan Baldwin, Claudia Drake and many more.